The Charity was set up by Joan Pollock in 1993. Joan started her career as a nurse and later moved onto the Travel business in the 1980s. In 1992 Joan was in visiting Manali, Himachel Pradesh, India. During her stay, a Doctor from the Lady Willingdon Hospital invited her to a slide show at the hospital on the Spiti Valley.

The valley had been closed to the outside world since 1959. Joan was overwhelmed by the beauty of this isolated valley and concerned to see the desolation of the people. When asked if she would help to raise money to build a hospital in Kaza, she was delighted and became totally committed to helping to improve the health, hygiene and general wellbeing of the local people of the valley.

Since then the charity has successfully built a Mission Hospital, Mane Village School and Mane Village Clinic. We have also set up a Child Sponsorship Scheme, a Mud Brick Project, and Knit for Spiti, creating opportunities for communities to get involved and participate in helping Spiti Projects grow. Joan Pollock has been taking pictures since she began working as a travel guide in 1977. Since then her career has taken her back and forth across the globe and she has documented pretty much every step of the way. She resides part of the year in London, England and the rest of the year from her suitcase!

Joan loves to take photographs of the people, life and culture of the countries that she has been welcomed into. She has made friends with whole tribes and communities and has an open house policy for those she has photographed more than once. Her early training as a nurse has proved invaluable, on occasion she as been known to interrupt her picture taking to check the health of the locals, especially the children, endearing her further into the community.

As a fellow of the Royal Geographic Society she is committed to environmental and conservation issues; her other love after her photography is Spiti, a breathtaking valley at the edge of the Tibetan Plateau in the Indian Himalayas, her spiritual home. She is passionate about the preservation of Tibet and Buddhism. Joan set up a charity, Spiti Projects 25 years ago. The Mirror Newspaper named her the ‘Angel of the Himalayas in 2000, and her commitment to Spiti – helping to improve the health, hygiene and general wellbeing of the people of the Valley - has occupied a major investment of her time and energy, and it has paid off with a hospital, school and clinic built from the funds raised. In 2015 a Community Centre was completed and opened in Kaza the capital town of the valley. Built in an ancient traditional way using mud bricks and solar energy. This was done to save co2 emissions and not use wood fires to heat the building in sub zero temperatures. The United Nations Climate Change Conference granted Spiti Projects Charity the Low Carbon award for the construction of the building in 2016.

Joan continues to take tours to unusual places with intrepid travelers, she hopes to explore Kazakhstan next year and to visit the nomads in remote areas. 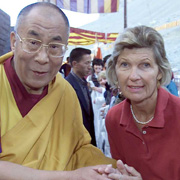 I am a matrimonial Solicitor, with on excess of 20 years' experience.

I have travelled extensively and am aware of the plight that effects indigenous communities. I bring to my role as Trustee a desire to assist and facilitate improvements for the families in Spiti.

I am focused on the educating and fund raising aspect of the charity.

I became aware of the charity a number of years ago after meeting Joan. In recent years I have searched for a charity that I connect with and have been fortunate to be accepted by Spiti.

I have worked in the charity sector for well over 20 years and during this time have undertaken various roles, including Volunteer Management, Project Management and even a stint as an interim CEO! (I didn't really enjoy it, as I much prefer to be 'hands on'!) I am currently working as the Communications Manager for a Social Enterprise working with marginalised women's groups in India.

I live in London with my husband and son and enjoy city life! India is a passion of mine and I have been lucky enough not only to visit on a number of occasions, but to have been employed by and volunteered for some amazing charities, doing some impressive and impactful work in this vibrant country - not least Spiti Projects!

I have known of Spiti Projects for a number of years and travelled to the Spiti Valley with Joan and Vicky in 2018. I was bowled over, not only by the beauty of the valley but also by the wonderful and welcoming people. After this trip, I was delighted to become a Spiti Projects volunteer, working on communications and campaigns and am proud to play a small part in the charity. I have been self employed for 42 years helping people in many countries through my work as an astrologer, counsellor and timing adviser.

I am a speaker and published author and having a background in the performing arts helped. I live in Guildford, Surrey, near the rolling north downs hills and town.

I have always seen myself as an explorer of this lovely planet and in helping people explore their lives and pathway.

In 2018 I went to Spiti with Joan and Margaret and Vicky. It had always been a big dream of mine to go to the Himalaya and, to combine this with offering my help, was this dream coming true! I also went to South India with Joan later that year.

I sponsor a little girl in Spiti to help with her education.

Spiti spoke to my heart. I felt such a closeness with its people and customs and mountains.

I shall always be grateful for this opportunity to travel there and to help where and how I can.

The work the Spiti Projects is accomplishing is of the greatest importance to the region and of inestimable value to the people of Spiti. This glorious area has been left behind and forsaken by the modern world: Spiti Projects will help the region with educational and medical facilities which had hitherto been inaccessible in the region. I support them with all my heart!

We are but visitors on the planet. We are here for ninety or one hundred years at the very most. During that period, we must try to do something good, something useful with our lives. If you contribute to other people’s happiness, you will find the true goal, the meaning of life.

HIS HOLINESS, THE DALAI LAMA